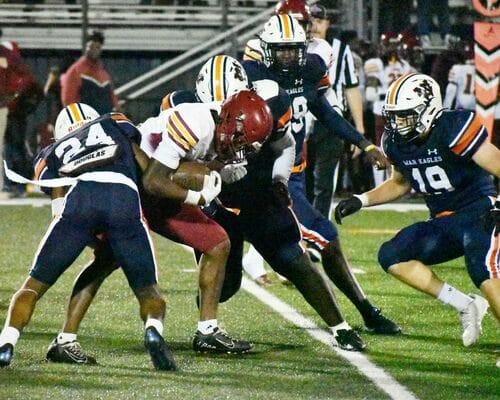 Click on the screen above to watch our weekly Highlights Show

It may not have been pretty, but it was definitely gritty and gutty on the part of Wayne County High School’s football team.

More importantly for the War Eagles, Friday night’s 39-36 home win over Laurel kept WCHS in the hunt for a home playoff game. The win improved Wayne to 7-3 overall and 5-1 in District 3-5A play heading into the regular season finale at West Jones on Thursday.

Starting two sophomores on the offensive line and then losing two defensive linemen and a punter to injury in the first half, things looked bleak for the War Eagles at halftime. Instead, younger players stepped up and made plays, the defense stopped Laurel on three fourth-down attempts in the second half and intercepted a pass to seal the victory.

Laurel on the board first with a 5-yard pass play with 3:29 left in the first quarter to make it 7-0.

WCHS answered with a nice drive that was capped off by a 2-yard run from Aikerien Hopkins. The Kyl Clark kick tied things up pat 7-7.

Laurel again took the lead with a 2-yard run with 7:28 left in the half, but Hezekiah West raced 42 yards for a score and Landon Pitts ran in the conversion to give WCHS its first lead of the night, 15-14, with 6:22 remaining before the intermission.

The Tornadoes then added a 1-yard touchdown run with one second left to take a 22-15 lead into the halftime locker room.

Laurel took the second half kickoff and quickly marched downfield, capping things off with a 32-yard run that opened up a 29-15 lead.

The War Eagles answered that with a 21-yard pass from Carter Hankins to Jalen Jones, and the Clark kick cut the deficit down to 29-22 with 7:43 left in the third quarter.

The defense held, allowing the offense to mount another drive that was capped off by a 5-yard run by Kelvin Walley. The Clark kick tied things up at 29-all with 21 seconds left in the quarter.

Isaiah Boyd would add a 40-yard touchdown on the first play after a fourth-down stop by the defense. Clark added the extra point and it was 36-29 in favor of the home team with 9:07 remaining.

A fumble on the ensuing kickoff allowed WCHS to set up at the Laurel 22-yard line. The drive stalled, but Clark came on to boot a 31-yard field goal that proved to be the difference in the game.

Two plays after that field goal, Laurel score don a 10-yard pass to trim the deficit down to 39-36.

After the Tornadoes forced a three-and-out, Laurel took over at midfield with 5:14 remaining. An interception by Taichaun Coleman ended the drive, allowing WCHS to run out the clock.

For a complete wrap-up of the game along with game and season statistics, be sure and pick up a copy of the Nov. 3 edition of The Wayne County News.