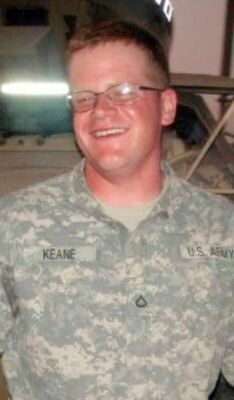 Born on Thursday, Dec. 8, 1988 in San Angelo, Texas, to Paul and Doris Keane, he was a Veteran, serving two tours of duty in Iraq while in the Mississippi Army National Guard, serving with the 114th 2nd Artillery Batallion. He was about to enter his 13th year of service in the Guard when he died. A 2007 graduate of Wayne County High School, he was a starter on the 2006 War Eagle football team that went undefeated and won the Class 4A State Championship.

He is survived by his parents, Paul and Doris Keane of Waynesboro; his sister and brother-in-law, Kelly and Will Taylor of Progress; his brother and his fiance, Steven Keane and Madison McReynolds of Hattiesburg; his maternal grandmother, Mary Ann Addison of Strafford, Mo.; his maternal grandmother, Melissa Keane of Dallas, Texas; his paternal grandfather and his spouse, Joseph F. and Carol Keane, Jr., of Kansas City, Mo.; his nephews, William Lawrence Taylor III and Henry Louis Taylor, both of Progress; his niece, Loralei Katherine Taylor of Progress; and many aunts, uncles, cousins and friends who were like family to him.

He was preceded in death by his maternal grandfather, Martin J. Addison.

In lieu of flowers, the family requests that memorials in his honor be made to the WCHS Football Booster Club, ℅ Wayne County High School, 1325 Azalea Dr.; or to the United Service Organization (uso.org).

Samaritan of the Quarter